Learn about the different players and regulatory bodies who administer Australia's energy markets, so you can understand who you may need to contact, and why.

There are a large number and variety of roles in Australian energy markets. Laws, rules and regulations apply to people engaging in energy at all stages of the market, so it's important to understand the role and context of your project within the broader market, and what rules might apply.

While similar roles and responsibilities apply to gas and electricity providers, these are governed in part by their own frameworks.

Generally, there are the following kinds of roles in traditional Australian energy markets:

However, as new technologies emerge, modern Australian energy markets are becoming more dynamic, and the lines between generators, retailers and customers are less clearly defined. For example, an energy consumer with rooftop solar can both consume and also generate and export electricity to the wholesale market, and as such has a two-way relationship with the network.

As technology changes, the rules that govern these markets need to adapt to facilitate new scenarios and enable innovation. The Energy Innovation Toolkit is part of that solution.

The National Electricity Market (NEM) is one of the largest interconnected electricity systems in the world. It covers around 40,000 km of transmission lines and cables, supplying around 9 million customers in Queensland, New South Wales, Victoria, Tasmania, South Australia, and parts of the Northern Territory.

The NEM is also a marketplace through which generators and retailers trade electricity in Australia. It interconnects five states that also act as price regions: Queensland, New South Wales (including the Australian Capital Territory), South Australia, Victoria, and Tasmania. The NEM delivers around 80% of all electricity consumption in Australia.

Western Australia and the Northern Territory are not connected to the NEM. They have their own electricity systems and separate regulatory arrangements.

Most wholesale gas in Australia is sold and transported under bilateral agreements between producers, pipeline owners, retailers and major users. AEMO operates a number of wholesale markets, including the Declared Wholesale Gas Market (DWGM) and other markets supporting the secondary trading of gas and pipeline capacity. In addition, AEMO operates Australia’s gas retail markets, the Declared Transmission System (DTS) in Victoria, and bulletin boards that provide up-to-date gas market and system information. You can read more about gas markets here.

Several government agencies are responsible for energy in the NEM and gas markets. The three market bodies are:

These organisations oversee the nation’s energy market and report to the Federal and State Government Energy Ministers. Each has a different role. The AEMC consults with stakeholders and drafts the rules which govern the NEM, and provides advice to government; the AER then enforces those rules, consults with stakeholders and drafts the regulations which exist underneath the laws; then AEMO manages the day-to-day operations of the market through which energy is bought and sold.

Additionally, the Energy Security Board (ESB) reports to the Energy National Cabinet Reform Committee (ENCRC) and sets direction for the AER, AEMC and AEMO to implement national energy reforms, providing whole-of-system oversight for energy security and reliability to drive better outcomes for consumers.

There are several other bodies whose responsibilities relate to energy markets, including:

In addition to these, a large number of agencies, regulators, private companies and peak bodies operate in the energy market, and each have different (although sometimes overlapping) roles. For any energy project, you might be required to interact with several market bodies or state/territory regulators. The purpose of the Energy Innovation Toolkit is to make this easier – see how the Regulation Navigator tool can direct you to the right people, and how the Innovation Enquiry Service can help you with your regulatory questions.

Here is an infographic setting out the key energy stakeholders at the national level:

Click on the below drop-down boxes to view an infographic of the stakeholders in each State and Territory. 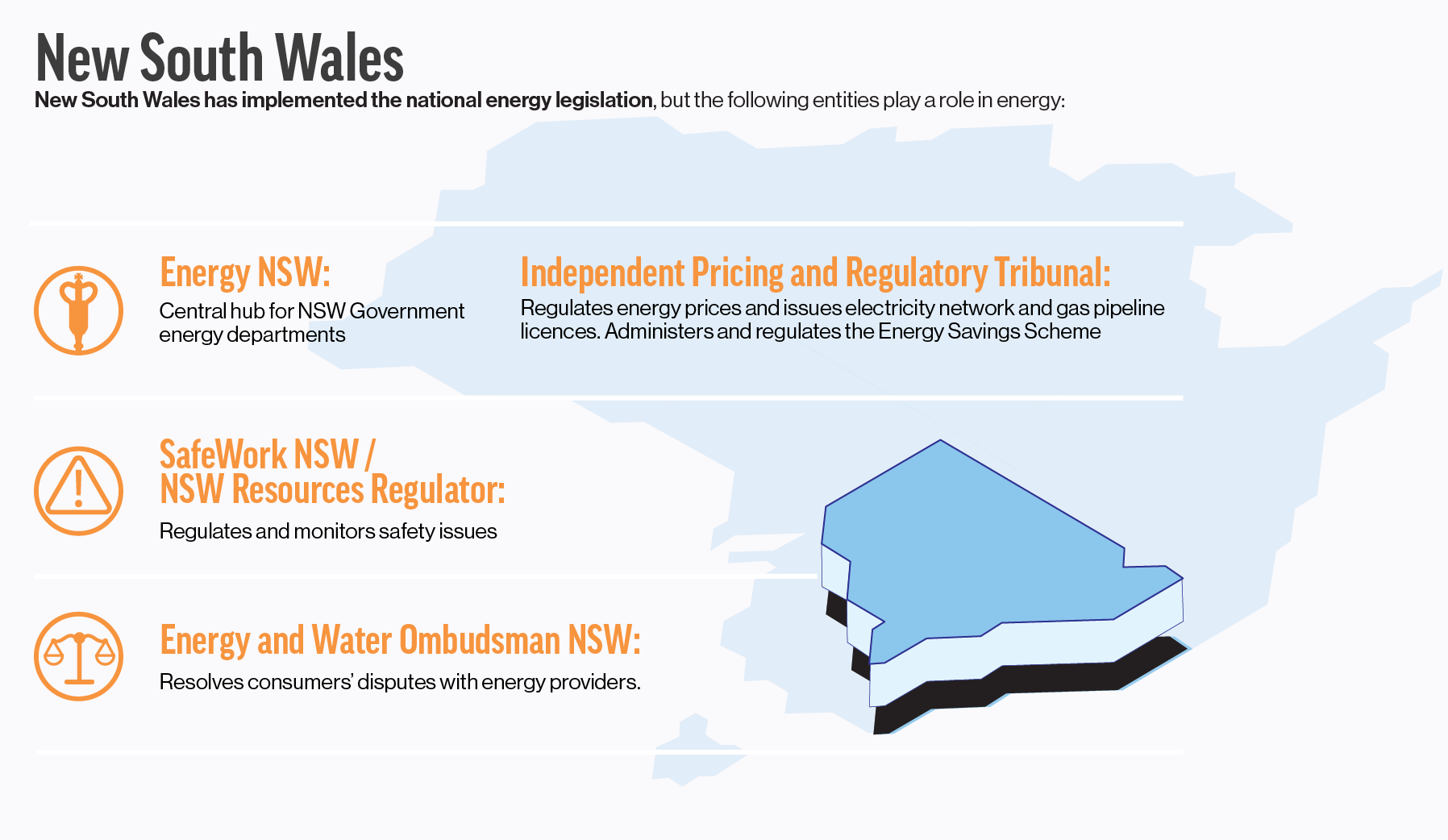 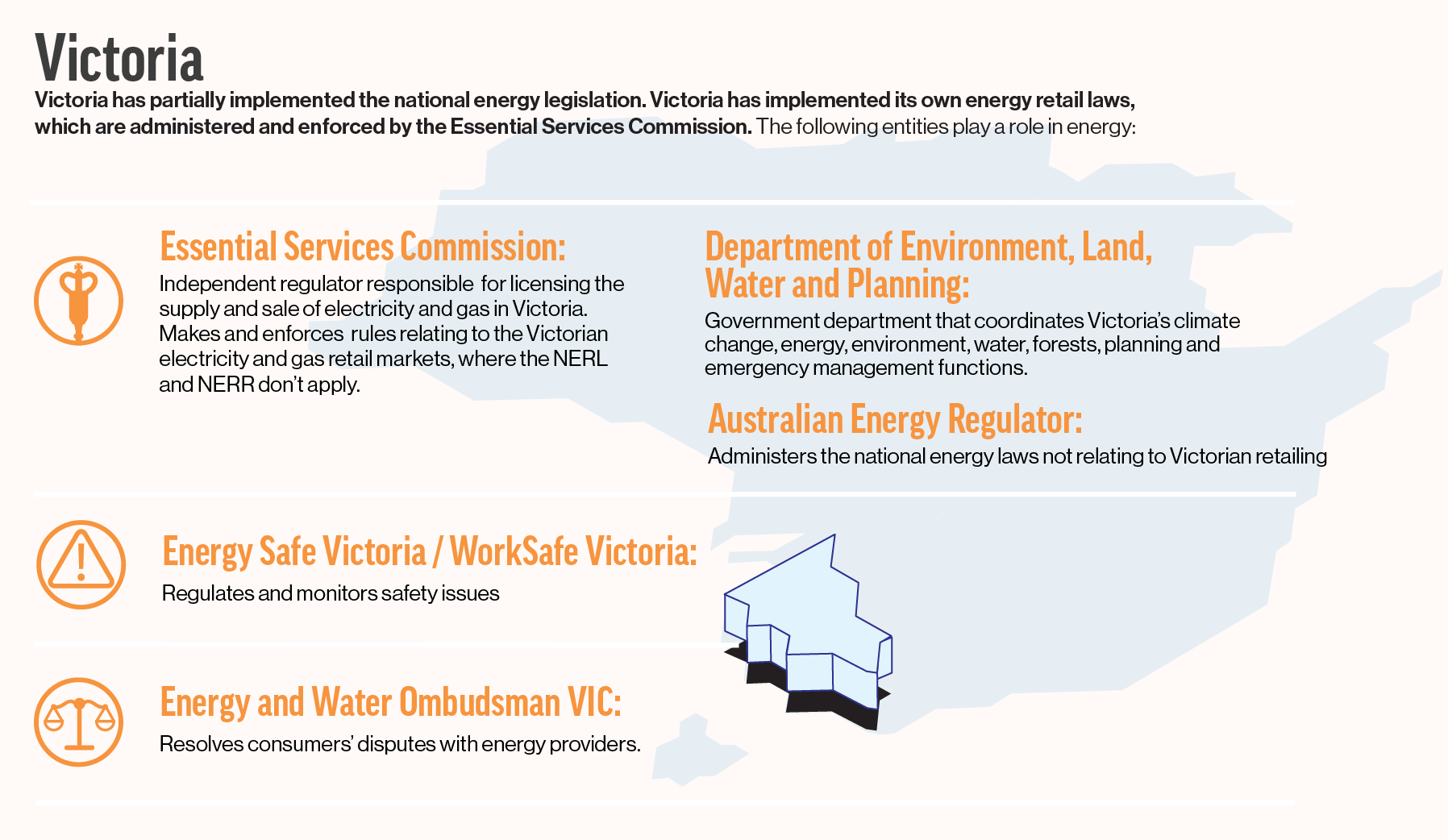 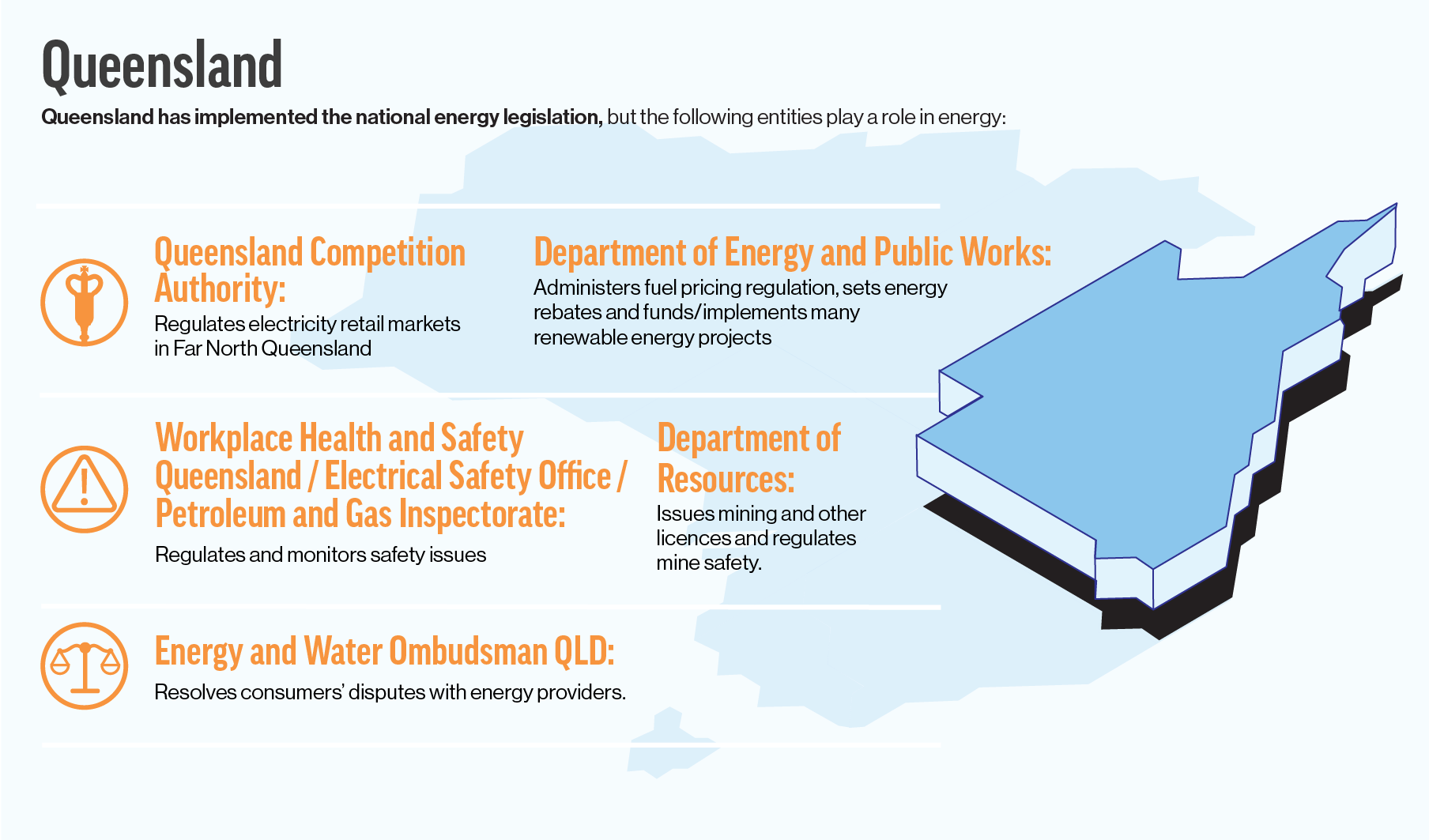 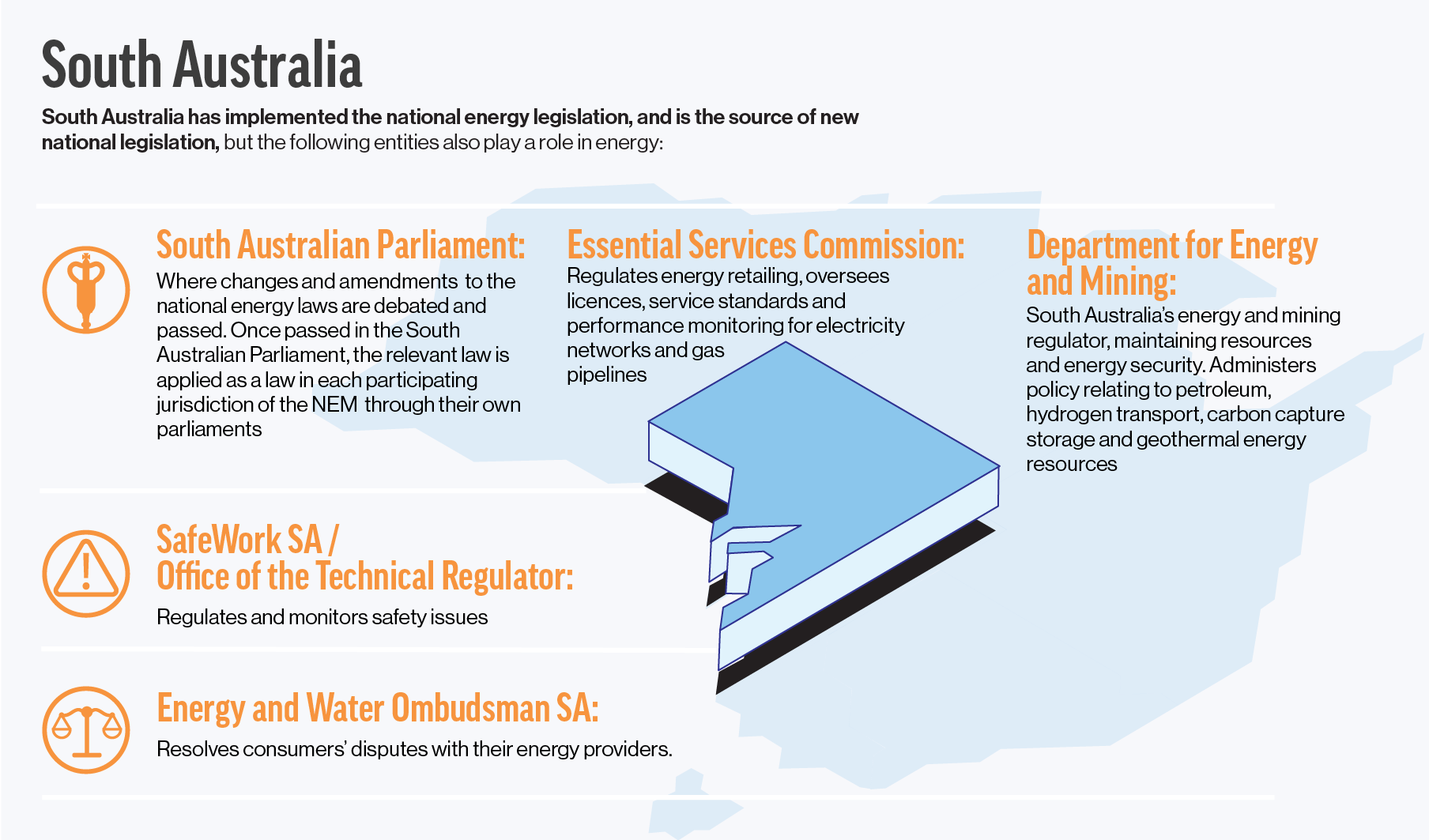 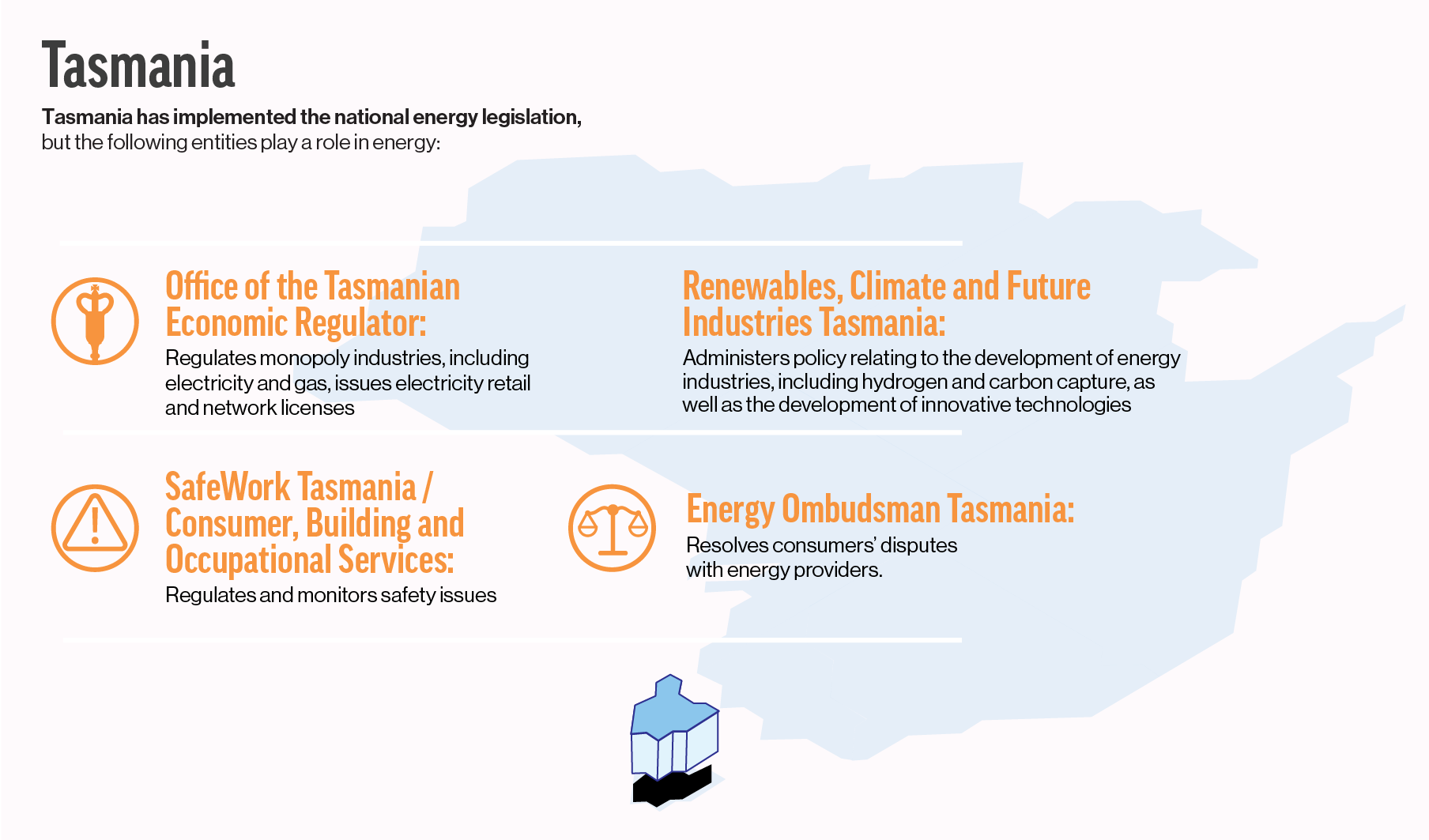 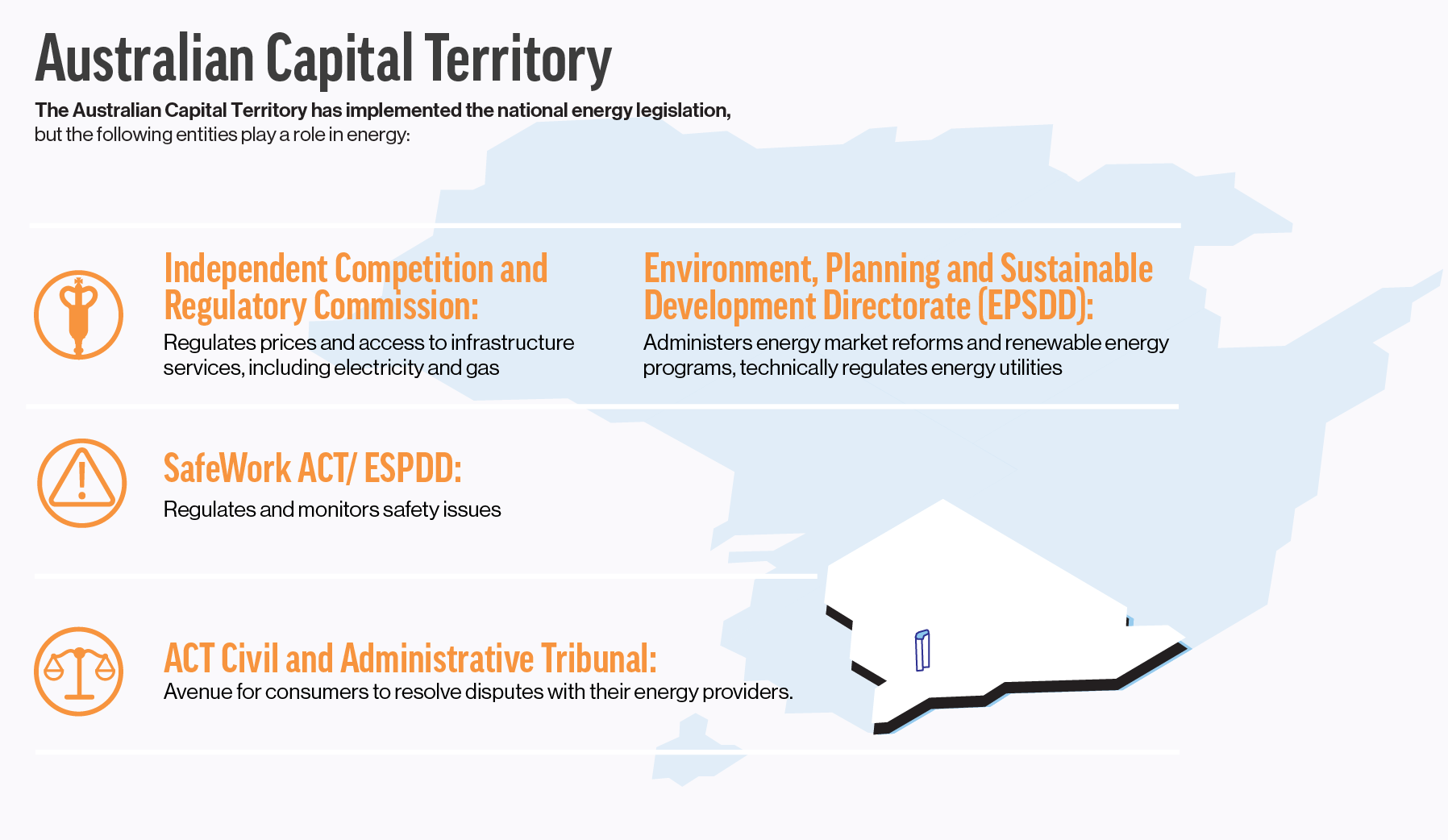 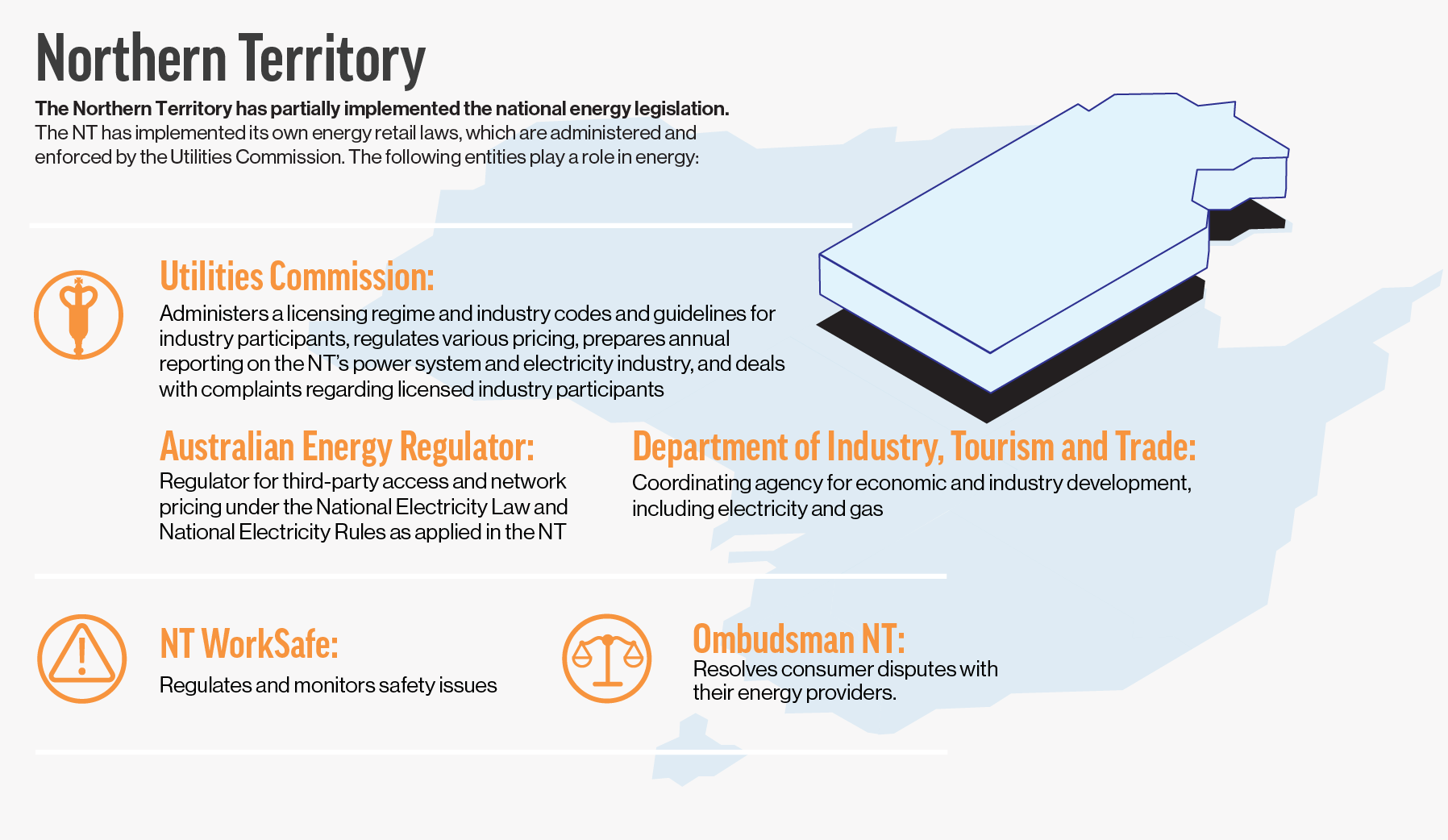 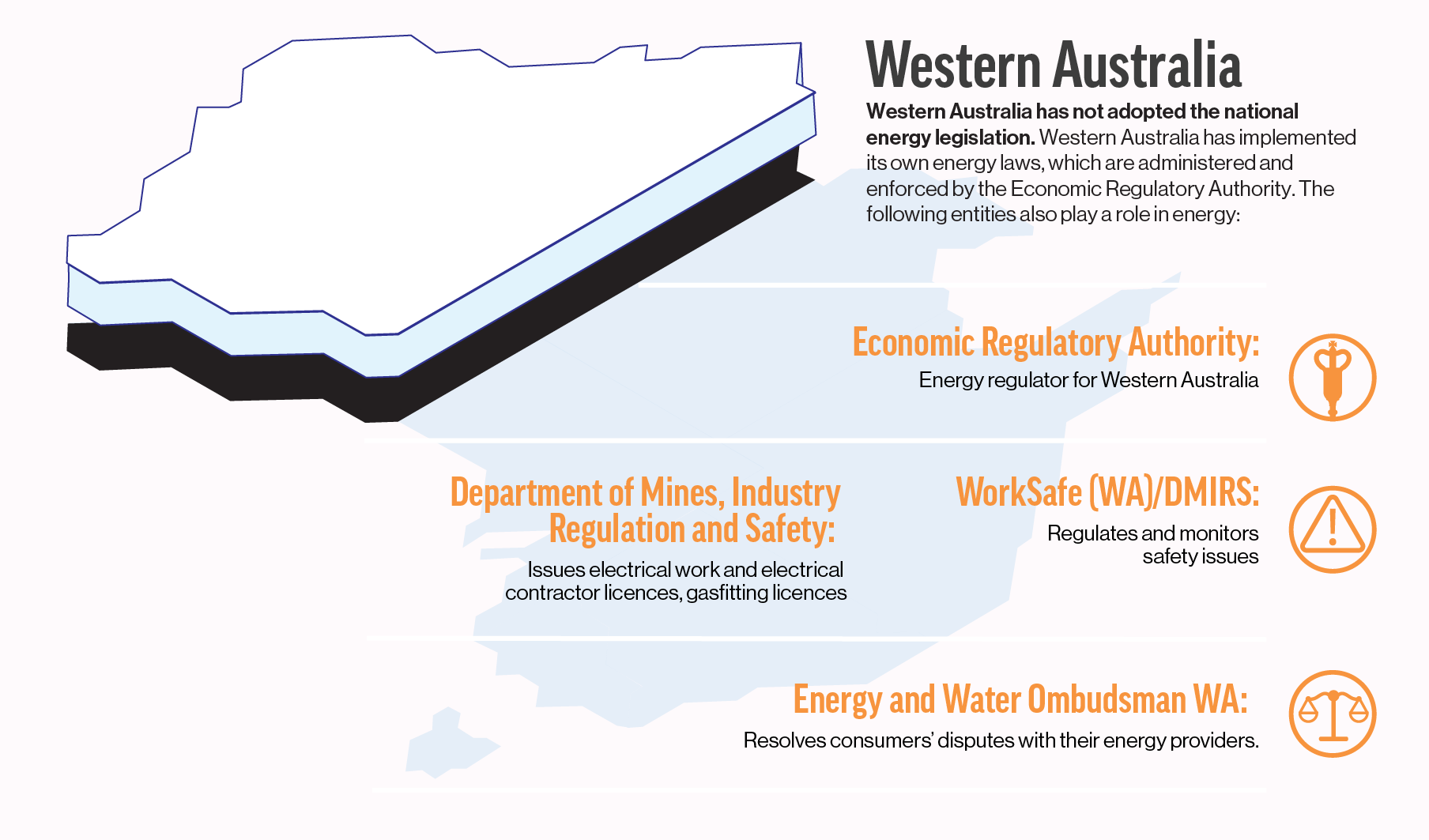 The operation of the National Electricity Market (NEM) and gas markets, and associated retail and consumer protection requirements are governed by a range of Commonwealth and state/territory legislation.

Importantly, the NEM does not include Western Australia, which is governed by its own separate legislation. Energy in Western Australia is regulated by the Economic Regulatory Authority, which is outside the scope of the Energy Innovation Toolkit.

Victoria has not adopted the national energy retail customer framework and has a separate set of retail rules. Retail rules in Victoria are regulated by the Essential Services Commission.  The Essential Services Commission is an Energy Innovation Toolkit Project Partner and has a role under its governing legislation in providing a Regulatory Sandboxing function for retail queries and waiver applications in Victoria.

There are three overarching national laws which are relevant to the national regulation of energy markets the:

Each of these laws has associated rules and guidelines as subordinate legislation which apply to a variety of market participants. More information about the legislation that applies can be found here.

Victoria is governed by energy retail laws separate to those laws governing the rest of the national energy markets. The Essential Services Commission (ESC) is the regulator of energy retail laws in Victoria and is authorised under its own legislation to implement the Victorian component of the Energy Innovation Toolkit. You can read more about this here.

The ESC is established under the Essential Services Commission Act 2001, and it also has responsibilities under several pieces of Victorian energy legislation, including the Electricity Industry Act 2000 and the Gas Industry Act 2001.

In addition to Victorian specific legislation, other state and territory regulators manage a range of jurisdictional energy frameworks.